It’s almost as if she’s heard the stories of her precociously articulate brother, stringing words together at his first birthday party. Baby Girl seems bent on doing the opposite, and at this stage I won’t be surprised if she’s still speaking in an endearing combination of tuneful babble, monosyllabic grunts and mime when she heads off to school.

I’m not worried about her hearing or her smarts. She understands words just fine. In fact, she listens and follows verbal direction better than her brother does (or her father, for that matter, but that’s another blog post). She just doesn’t seem inclined to say any of the words she so clearly knows the meaning of. She’s obsessed with books, adores looking at pictures of animals, but makes only one Generic Animal Sound for all of them bar the snake. (Is ‘hsssss’ technically a word, do you think?). The Generic Animal Sound is both adorable and hilarious, because it doesn’t sound like any animal I’ve ever heard: ‘Nguck! Nguck! Nguck!’, voiced gutterally down in her throat. A lady thought she was choking the other day while we were out shopping. No, I had to explain, we just happened to be passing through the pet food aisle and she was pointing out all the bags displaying puppies and kitties and birdies and mice. Nguck! Nguck! Nguck!

I think she’s toying with me, to be honest. A month or so ago, I was thrilled when she finally started saying something that sounded like ‘Mama’! She’d often call it from another room in a sweet piping voice, then look surprised when I appeared. Or she’d pair it with her Generic Animal Sound, which I didn’t find complimentary – but I was happy to take what I could get, given how long I’d been waiting for this ‘Mama’. Which, if we’re being entirely objective, was really more of a ‘Mo-ma’, but who’s splitting hairs? Not me. Until the day she came trotting in to me, eyes shining with delight, sporting a lush beard of cat hair on her drool-soaked chin, saying ‘Mo-ma! Mo-ma! Bwaaaa Mo-ma! Nguck. Nguck.’, and I realised two things.
1. ‘Mo-ma’ = ‘Thomas’. Not ‘Mama’. Thomas is the cat’s name, stupid.
2. She’d just been pashing the cat. 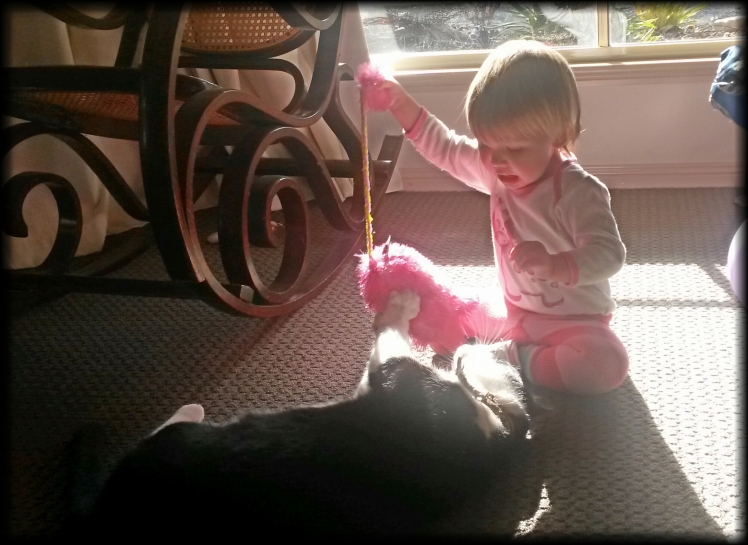 Edited to add: To add insult to, er, existing insult, the cat was named after Thomas the Godforsaken Tank Engine. As if I needed another reason to despise that train.

13 thoughts on “And so, the child remains stubbornly pre-verbal”

Helping women with a mission

What's life without love and a few dirty dishes?