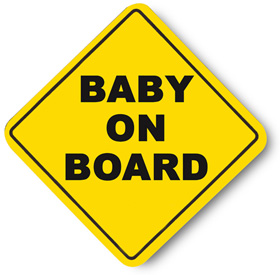 So, this story was all over my screen earlier this week. A couple were on their way to hospital for the birth of their second child. Mum told Dad en route, ‘Honey. We’re not going to make it. Pull over!’ (or words to that effect). By the time hubs pulled in to the carpark of a fruit shop and hoofed it to the passenger side, the baby’s head was already out. He called 000 and the operator talked them through the rest, including a minute or so of brisk massage to encourage the baby to take her first breath. Now, don’t get me wrong, I think it’s an amazing experience that this family have just had, and hats off to Dad for being such a fantastic support to his wife, especially in the absence of a machine that goes ‘PING!’. But seriously, the reporting of this on the commercial networks here has really ground my gears!

and this cringeworthy interview, in which serial asshat David Koch directs all but one of the questions to the baby’s father, while the mother is forced to sit there smiling awkwardly, with nobody even mentioning the fact that she is OUT OF THE HOUSE, WEARING MAKEUP AND NOT EVEN COVERED IN BABY SPEW a mere couple of days after her baby was born. Sorry, ‘delivered’. By her husband. (Maybe that’s why she looked so daisy-fresh. After all, her husband did all the work, right? She was just along for the ride, according to the headlines). At the conclusion of the interview – during which the brand-new parents are publicly grilled about whether they plan to have more children, and the wife’s mother is referred to as ‘the Dragon’ by a man I assume she’s never met – Koch has the audacity to effusively congratulate the husband without acknowledging the woman sitting right beside him. You know, the one who probably sat there doing a crossword while her husband reached in and hauled a baby out of her vagina. He actually looks surprised when Samantha Armytage gently interjects with a brief ‘Well done’, to the mother. It really is some of Kochie’s best work since that time he told us how he supports breastfeeding in public provided we ‘keep it classy’ (and apparently took credit himself for how classily breastfed his own four children were, according to the linked article).

I met some new friends at a mothers’ group not too long ago. By coincidence, one of them had used the same private midwife as I had, so we knew we had some common ground as far as our attitude towards normal birth goes. In conversation with another mum there, we heard that my new friend had had a planned homebirth, but her labour had progressed so swiftly that the baby was calmly born before the midwives could get there. The other mum was horrified and slightly confused. ‘But, who delivered your baby then?!’, she gasped. My homebirthing friend and I exchanged a look, and I was nodding before she had even spoken. ‘I did’, she said, as if it were the most obvious thing in the world. And of course, it is.

Pregnancy is not a medical condition. Birth is not inherently an emergency. Pizzas are delivered. Babies are born. And mothers usually have something to do with the process, if they’re allowed to. The least we all can do is recognise that.

My heartfelt congratulations to Ailie Waye-Harris and her husband Caleb on the roadside arrival of little Eloise earlier this week. By the sound of things, you both did an amazing job guiding her safely earthside. Please don’t imagine for a minute I’m implying that Caleb is not a hero for the part he played. More so that I wish Ailie’s strength and courage were also being celebrated. This headline from your local paper is far more to my liking:

21 thoughts on “Heroic dad delivers baby. Mother was probably also there but we can’t be sure.”

Is It Bedtime Yet?
Stepping Back

Life, Love and Dirty Dishes delivers award winning funny tales from the parenting front line delivered with humour and heart. We're all in this together.