There. I said it. I can’t stand that smarmy, self-important little train and his mates, and I’ll tell you why. It’s not just because they’re irritating and uninspired (although there is that). It’s not because of their writers’ appalling history of sexism (Hello? It took them until 2003 to introduce a single female character who wasn’t a  carriage, for crying out loud). It’s not even the preachy, spiteful undertone of the stories, in which day-in, day-out, one or the other of the engines gets clever, disobeys an order, shows off, makes a hash of things and then is duly punished and/or humiliated (way to encourage creativity, tolerance and independent thought, Thomas). It’s not even the fact that children steadfastly remain obsessed with these mindless machines of mediocrity despite their obvious shortcomings.

No, what really busts my buffers is this:

This Thomas track is the bane of my existence. Every few weeks Boy-Child starts badgering me to get the Thomas track out. I fob him off as long as possible, knowing that I’ll need time, space and patience to dedicate to this project. Time, space and patience are three things we could definitely use more of here. Eventually, I am sufficiently badgered to clear some floor space, pen the baby, and lug the box down from the shelf.

To be confronted with this: 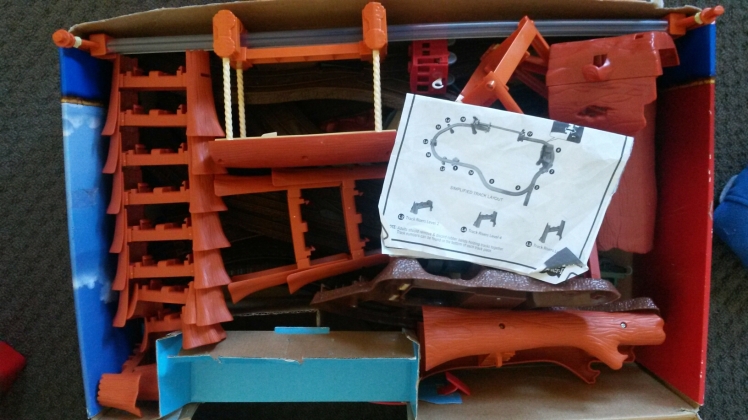 I think you may actually need an engineering degree to assemble this toy without having an emotional breakdown at some stage. Of course, the engineering degree would be rendered useless by the constant ‘helping’ of the child involved, so you’d probably suffer a breakdown regardless.

It takes up the entire floor of Boy-Child’s room, or half of our lounge room, whichever is more inconvenient at the time. It is a multi-level construction, with various ‘risers’ needed to raise the track to the appropriate height at different locations. There are only two possible ways to assemble the track such that a train can successfully traverse its length, so there’s no option to just give the kid free rein and let him slap something together while you play angry birds get on with the housework. Oh, no. As per the Fat Controller’s manifesto, thinking outside of the box is discouraged and you’ll end up with a mangled pile of track pieces and a furious preschooler if you try to bypass the instructions and get creative.

It usually takes me the better part of an hour to assemble, factoring in time taken to locate missing pieces, redo bits I’ve put in backwards, redo bits that Boy-Child has helped with, keep an eye on Baby Girl in case she grizzles or escapes, locate and repair pieces that have been thrown across the room mid-tantrum, apologise for my tantrums, and listen to constant yammering of ‘Are we nearly done yet? Can I drive Thomas now? MUMMY! I SAID ARE WE NEARLY DONE YET?’.

They say these are the best years of my life. I know they are secretly laughing at me when they say this.

Anyway. Whenever the track is eventually assembled, there comes the moment of truth: Boy-Child locates Thomas, James and their carriages, and sets them clickety-clacking around the circuit. This is usually delightful for approximately twenty seconds, because at least one of the track segments will be poorly connected and someone will be derailed as a result. Cue tears. Fix connection. Reset trains. Clickety-clack until next fault in track becomes evident. Cue tears. Repeat until all faults corrected and trains are able to complete a full circuit without crashing. Remember that the track includes a ‘zipline’ feature, in which the train pootles onto a little platform which is then released down a suspended rail. The train will pretty much never be travelling with the correct momentum for this to work without manual assistance. The zipline needs to be quickly reset after every use so that the next train doesn’t plunge straight over the edge and down a 15cm abyss of death. If this happens: Cue tears, curse trains, et cetera.

With this all finally under control and Boy-Child hitting his rhythm with resetting the zipline, we usually then come to grief because either Thomas or James will be traveling slightly faster due to having a fresher battery or a lighter carriage (or maybe a tailwind, how would I know?), and will keep catching up to the train in front and barging him off. Actually not unlike a Thomas and Friends storyline now that I think of it. Boy-Child hates this passionately and will scold the faster train and shift him back, only to have the process repeat until he’s incandescent with rage at the injustice of it all. Trains fly. Eternal hatred is sworn against the offending vehicle. Timeouts are issued and trains are confiscated. We rarely get more than 15 minutes of play out of the godforsaken thing before he needs to be removed from it. And for the rest of the day, just walking past the track will make us both seethe, but I refuse to take it apart because I’ve got half a morning invested in it already and by crikey he’s going to play with it and enjoy himself for at least two days so help me Jebus.

And so I say this. Thomas: stick it in your smokestack, mate. You are no friend of mine. I hope your firebox fizzles and your wheels wobble you right off the edge of the Island of Sodor one day.

12 thoughts on “I hate Thomas the Tank Engine”

Helping women with a mission

Life, Love and Dirty Dishes delivers award winning funny tales from the parenting front line delivered with humour and heart. We're all in this together.